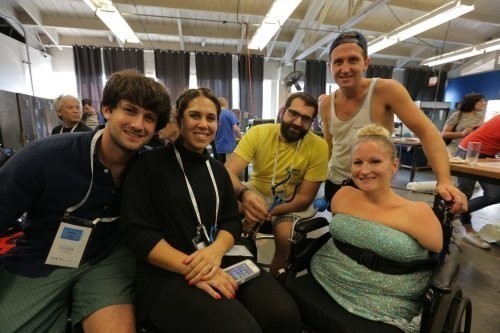 The vast majority of consumer technology exists to supplement our lives, to make them ‘easier’ and to do things more quickly. Without these innovations, life would still continue at the normal pace for most people. Personally, I believe, that most consequential use of technology is helping people who have a disability. There is a much more honest description for such a consumer of technology: “Need-Knower.” This phrase, coined by TOM Global’s Arnon Zamir and team, makes an important point about the role of people with disabilities in the advancement of technology. It correctly identifies that there are still advancements to make to help all people, and the people who can identify those deficiencies in existing technology are “Need-Knowers.”

The development of assistive technologies is one of the many reasons for the existence of TOM Global, a branch of the Israel-based Reut Group. TOM is an acronym for ‘Tikkun Olam Makers’. Tikkun Olam is the Hebrew phrase for the act of fixing problems in the world.  ‘Makers’ refers to the grassroots movement of small scale manufacturing or making, usually aided by 3D printing. The TOM mission is as follows:

“TOM (Tikkun Olam Makers) is a global movement of Makers committed to using new and innovative technologies for changing the world. TOM is an Israel based movement that has a goal of changing the lives of underprivileged populations in developed and developing countries around the world. At TOM we are committed to our community and work together with them to create hard and software solutions for real world problems.”

So, what does TOM actually do to improve the world?

TOM is becoming known for extremely intense and fast-paced Make-A-Thons that take place over 72 hours in different cities all over the world. It is at these 3 days events that Makers, Designers, Healthcare Professionals, Need-knowers and more join together to develop new and innovative technologies. Each project is structured around the intimate knowledge of a specific problem, experiences, and expertise of a Need-Knower. From that starting point, teams have 72 hours to develop and fabricate prototype versions of software and hardware that either accomplishes a goal directly or jump-starts development of a new technology in the commercial world.

I had the great fortune to be a participant in the recent Bay-Area Make-a-thon hosted by TOM Global. I was part of a project team (http://projects.tomglobal.org/project/111) to develop what is seemingly a simple device that should already exist on the market. The Need-Knower who brought this project idea to TOM is Kim Lathrop. Kim is an incredible woman who was born without full limbs. As such, she was seeking a device that would allow Kim to move objects (plates, cups, TV remote, etc) around her environment without having to grab objects directly with her teeth. Thus, the ‘Grabber’ was born. The ‘Grabber’ is a simple mouth-operated grabbing claw on a 6” extension, allowing the user to move light objects by clenching the jaw on specially designed force-plates. This whole system was developed by a team of 5 people in only 72 hours. Kim was able to leave the TOM event with an early prototype Grabber.

At the end of TOM, we won an award from MakerBot. The award, given for rapid prototyping, was received because of the many iterations we completed using the combination of 3D CAD software and 3D printers. Using cutting edge 3D drafting software, my team and I were able to print and test every single component of the ‘Grabber’ many times before assembling a final prototype. These techniques allow for lightning-fast testing and production.

While being part of the ‘Grabber’ team and receiving an award from MakerBot is undoubtedly a highlight of my experience at TOM, there were larger-scale takeaways that are more important. Not every project as TOM is a simple mechanical device; most projects have a digital interface component. To give an idea of the large range of technologies developed at TOM, I will list a few: Budget-friendly powered wheelchair, a game for refugee children to help with PTSD, Cup holders for crutches, Sign-language to text digital translator, using brainwaves to write music, Bed-sore pressure monitors that report to an App, among many others. The broad range of projects developed at TOM made apparent that even though we enjoy advanced consumer technology for the majority of people, there are still many problems to solve. This is what I find to be the most important thing from TOM: the awareness of how much is left to do to make sure everyone has access to technologies that have the potential to make life easier and richer. In many cases, those technologies do not exist, and that is why creating interdisciplinary teams is so critical to solving these problems.

The lessons I have taken away from TOM will stay with me throughout my life and through my work. Tackling problems with Need-Knowers not only as consultants, but as critical members of the project team, has given me new perspective on the impact of design decisions. Utilizing power of design and rapid prototyping, as well as concentrating talent and skills for 3 days, gives one a window to do something that has the power to drastically improve the lives of many people, and also reveals how the world can be changed in only 72 hours.

An article written by Kim Lathrop about her experience at TOM SF:

The ‘Grabber’ on the MakerBot Thingiverse

All TOM projects can be found for free at http://projects.tomglobal.org/

Disclaimer: The author of this post is the cousin of TOM co-founder, Arnon Zamir