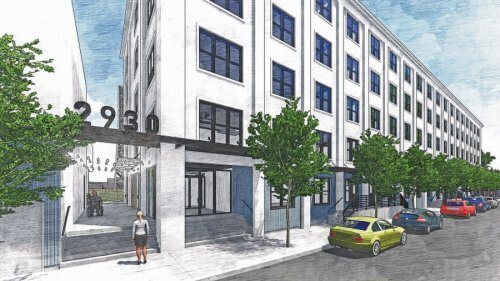 An innovative structural system has been central to the design and construction of a $20-million apartment and retail development just outside the French Quarter.

But on top of learning the ins and outs of a new system, the project team has had to contend with a sequence of challenges—including rising river levels, a Category 4 hurricane, environmental testing and pandemic-induced shortages of supplies and manpower.

The 68,923-sq-ft project at 2930 Burgundy St. in the historic Bywater neighborhood of New Orleans includes the ground-up construction of a mixed-use development with two structures: One is a five-story residential building with 69 apartment units, and the other is a two-story commercial building with 2,500 sq ft of ground-floor retail space, a rooftop pool and an indoor fitness center. The complex also features off-street parking. 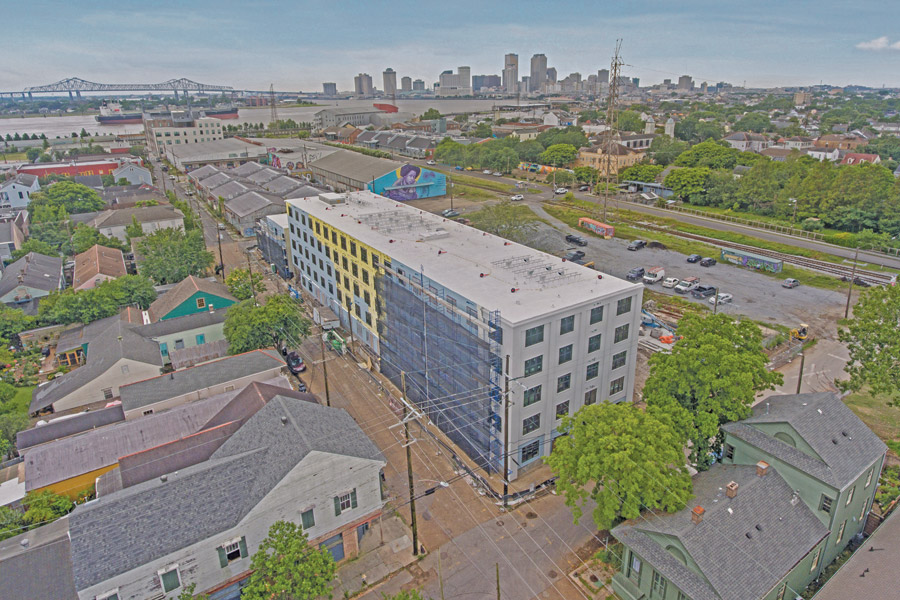 With its location a few blocks from the Mississippi River, the project encountered delays after rising water levels forced some of the work to shut down in early 2021.
Photos courtesy of Ryan Gootee General Contractors LLC

“It was a blighted urban infill lot in a great location, so getting the chance to put it back in commerce and get a mixed-income building on the site was exciting to us,” says Stephanie Mezynski, director of construction services for Green Coast Enterprises, which is developing the project with Iris Development Co.

The project officially broke ground in January 2021, with construction moving ahead in July. 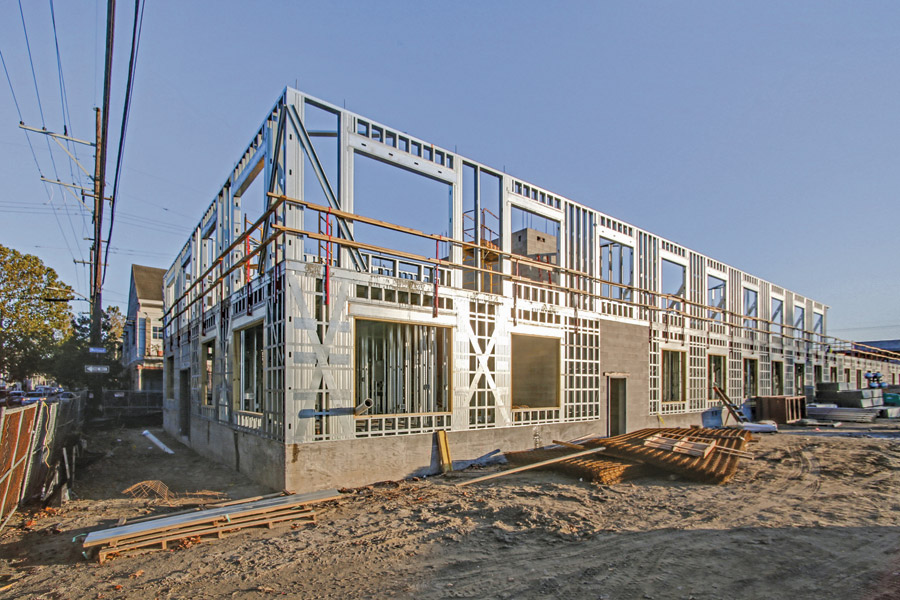 One of the highlights of the five-story building’s design is a unique framing and flooring system, combining load-bearing, cold-form metal studs with Nucor Ecospan-branded composite joists to support them.

“Every inch of ceiling height becomes important when you’re trying to get a five-story building with only 55 ft.”
—Chad Leibe, Senior Superintendent, Ryan Gootee General Contractors

PACE Group had previously worked on other projects using cold-form studs, but none that combined this type of wall structure with composite joists. “I don’t believe it’s been done here in New Orleans,” says Johann Palacios, CEO and owner of PACE Group.

Ecospan’s proprietary Shearflex fastener attaches the concrete deck to the steel joists, creating a T-shape that provides more support than the joist would by itself.

“The system basically takes the best features of related systems and puts them into this system,” Palacios says, adding that structural engineers have come to rely more on this option because of labor shortages and the escalating price of materials.

Cost-effectiveness is one advantage of the framing system, which is lightweight enough that it eliminates the need for a tower crane. “A tower crane can add a quarter-million to a half-million dollars to a project,” Palacios says. 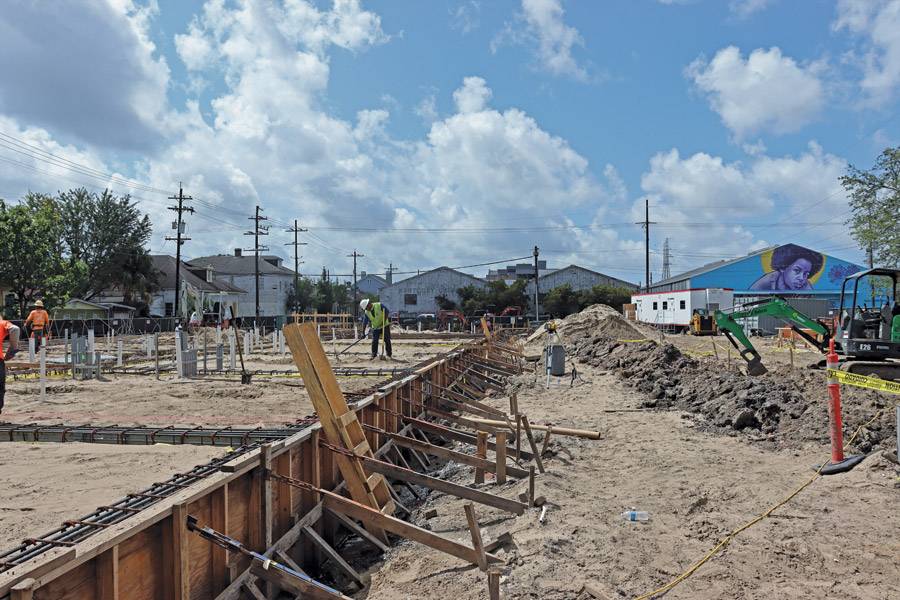 Crews prepare the foundation. Because construction was taking place on the site of a former rock crushing plant, the site had to undergo soil testing before work could proceed.
Photos courtesy of Ryan Gootee General Contractors LLC

Another benefit of the system is that it didn’t require as many approvals; Palacios notes that the builder submitted only two RFIs to obtain further detail on the cold-form system. “That proves the system was the appropriate system for this project,” he says.

The joists allow for more room to run mechanical systems and allow for higher ceilings and, thus, lower overall building heights, which can be an advantage in New Orleans’ historic areas, where city requirements often limit how tall buildings can be.

“Every inch of ceiling height becomes important when you’re trying to get a five-story building with only 55 ft,” says Chad Leibe, senior superintendent for RGGC.

For the contractor, incorporating the cold-form metal framing system called for BIM modeling, which allowed the team to address issues that otherwise would have arisen during installation. “I think we were able to address 80% to 90% of conflicts before we put any material on site,” says Kevin Sprehe, project executive with RGGC. 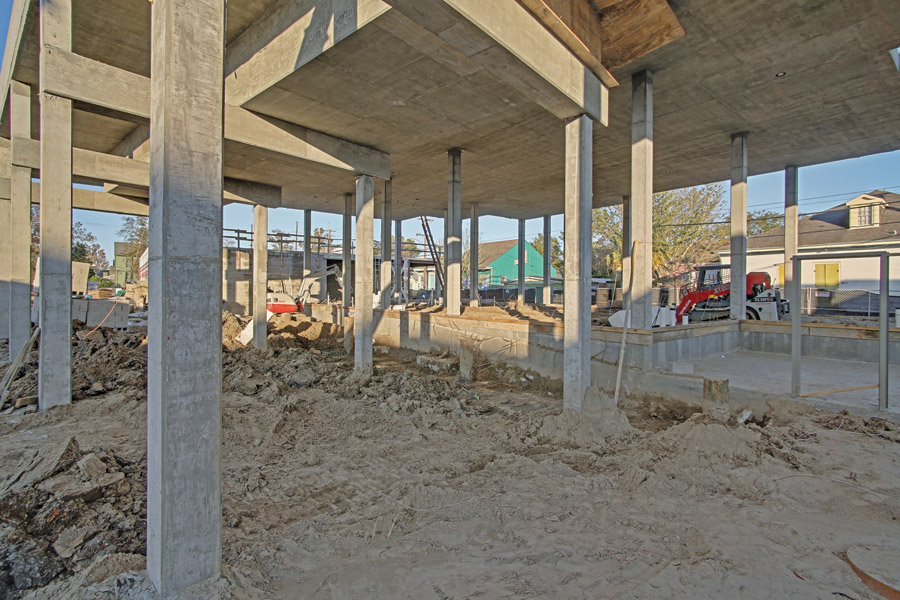 With a combination of concrete and steel supports, the structure is expected to have a longer-than-average life expectancy.
Photos courtesy of Ryan Gootee General Contractors LLC

With the building going up in hurricane-prone New Orleans, the project team designed the steel and concrete structure to withstand southeast Louisiana storms.

In planning for a rectangular, five-story apartment building with rows of windows on every floor, the engineer took extra care to make sure the building could stand up to heavy winds.

“Glass is not a very reliable or wind resistant material. So lots of windows equals a structural engineer’s opportunity for creativity,” Palacios says.

The solution was to strategically place metal strapping in the form of an X inside interior walls while being careful not to make the strapping too thick, which could create bulges in the drywall.

“A lot of times engineers will throw their hands up and say you have to get rid of these windows in order to have enough solid real estate to keep the building from blowing away,” Palacios says. “But we always approach it in a way to figure out how to design the building without forcing a change in aesthetics.”

“Hurricane Ida was a true test,” Palacios says of the storm, which made landfall Aug. 29, 2021, as a powerful Category 4 storm. “[The system] handled it well.” 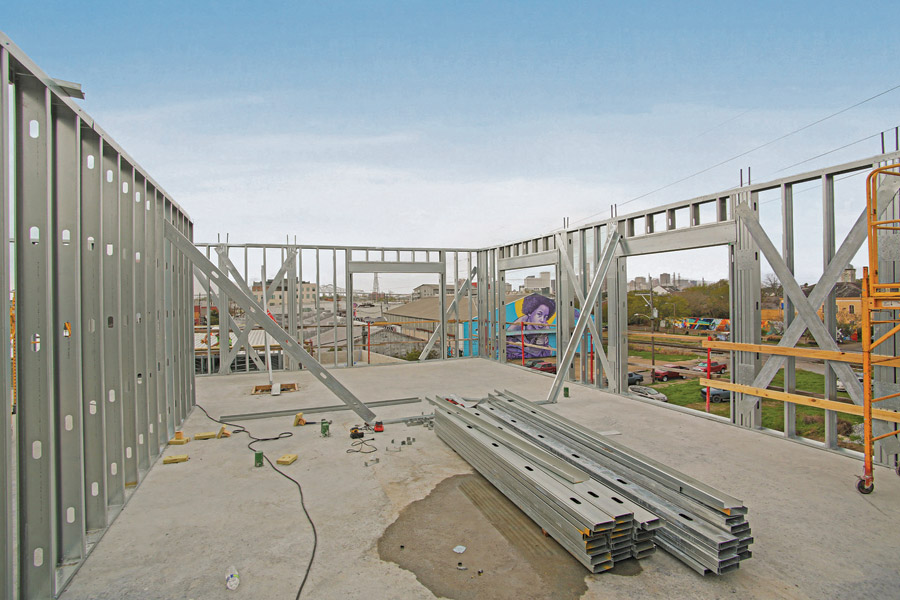 Crews frame out one of the levels of the five-story residential building.
Photos courtesy of Ryan Gootee General Contractors LLC

Along the way, the 2930 Burgundy project has encountered a host of challenges that required the project team to adapt to new plans and devise creative solutions.

Before work began, the project team learned that they would be building on the site of a former rock crushing plant. That meant before demolition work could start the site had to undergo soil testing to check for contaminants and it had to receive clearance from the U.S. Environmental Protection Agency. The process took about six weeks to complete in early 2021.

Around the same time, the water level of the nearby Mississippi River had risen too high for work to take place; the U.S. Army Corps of Engineers limits construction near the river whenever the water level reaches a height of 15 ft, and the project team had to contend with delays.

After the project was able to break ground in July 2021, work progressed quickly. And even though weather delays pushed back completion by two months, the project was on track to wrap up by the second week of December. Then came Hurricane Ida, which hit when the project was about 90% complete. The hurricane’s winds ripped off about 20% of the roof of the residential building, causing water to leak into about half of the apartment units. The storm did not damage the commercial building.

“A big positive was that with the construction and design, besides having some roof damage and having to do some Sheetrock repair, the building stood strong,” Leibe says. “There were no signs of stress on the building or any real movement.”

Contractors moved quickly to set up generators and clean up the site. The team was able to assess the site just two days after Ida made landfall and replaced drywall and insulation in the weeks that followed.

Challenges related to COVID-19 were present throughout the project, and procuring materials amidst supply chain slowdowns became difficult.

“Not only were these factories dealing with their own internal COVID issues, but they were also dealing with not being able to get the raw materials that we, the end user, needs,” Leibe says.

To work around these delays, the contractor split up construction to work on one half of each floor at a time. “You’d get the bar joists and metal deck down for the first half of the second floor. Then that crew would move on to the second half while the concrete crew poured, and then the framing crew started right behind the concrete,” Leibe says. 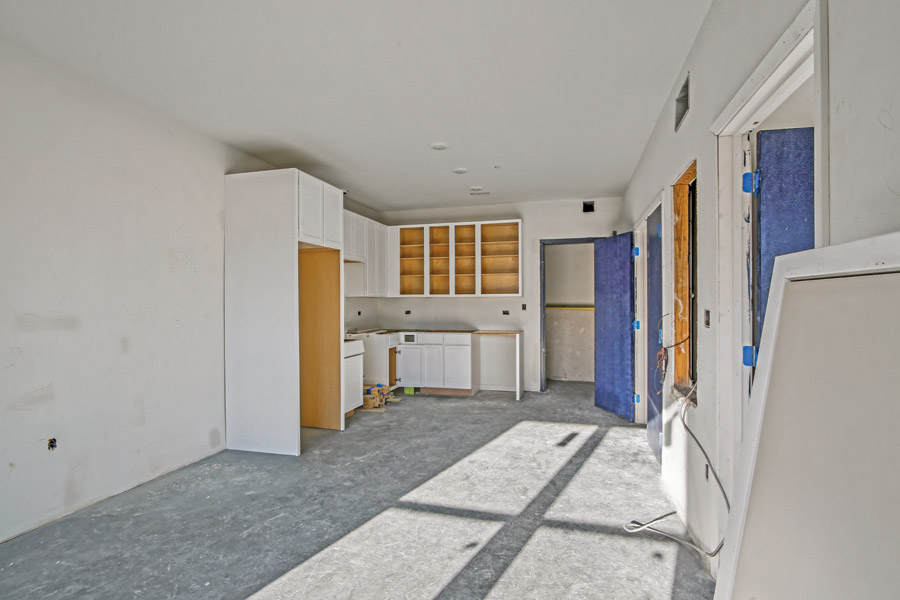 Interior work is shown inside one of the project’s 69 apartment units in October 2021. About half of the units suffered water damage from Hurricane Ida and needed new drywall and insulation.
Photos courtesy of Ryan Gootee General Contractors LLC

In designing the stormwater system, the project team had to meet the city of New Orleans’ rigid requirements for stormwater management and drainage. Adding another layer of complexity, the city’s underground stormwater drainage connection at the Burgundy site is in a shallower location under the street than connections are in other parts of the city.

To reach the connection point, the stormwater pipes run the length of a long parking lot. The area where the cars park consists of a permeable paving system covered with a thin layer of gravel—another stormwater management solution.

When the contractor raised questions about the system, the engineer reached out to the vendor of the pipe to make sure the lot was safe enough to support the weight of vehicles without crushing the shallow pipe. If it wasn’t, the lot would need to be built higher and with more material, which would have raised costs. But the vendor was able to confirm the pipes could withstand the weight of the types of vehicles using the lot.

“That kind of back and forth in engaging with manufacturer and vendor expertise on what they know their products can do is what makes these kinds of projects successful so we don’t necessarily add cost,” Palacios says.

The 2930 Burgundy development will bring new commercial and residential space to the historic Bywater neighborhood of New Orleans.
Image courtesy of Rozas-Ward Architects

Designed to be Energy Star-certified, the complex incorporates a mix of durable and energy-efficient features, including energy efficient appliances, LED lighting, operable windows and stormwater retention.

“Ample exterior insulation should help keep the building comfortable with minimal cost,” Mezynski says. “The steel and concrete structure should give it a longer-than-average life expectancy and help it stand up to the New Orleans weather.”

The complex will offer below-market apartments along with market-rate units, which developers hope will offer more diverse opportunities for housing and contribute to the economic life of the area.

“It is a mixed-use project, so it brings some jobs and commerce into the neighborhood, adding back a corner commercial building like what was on many corners in this neighborhood years ago,” Mezynski says.

The project is on track for completion by May 2022.