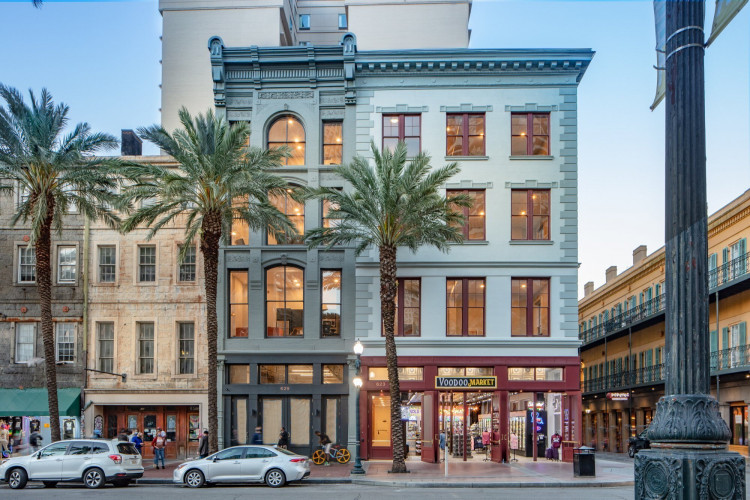 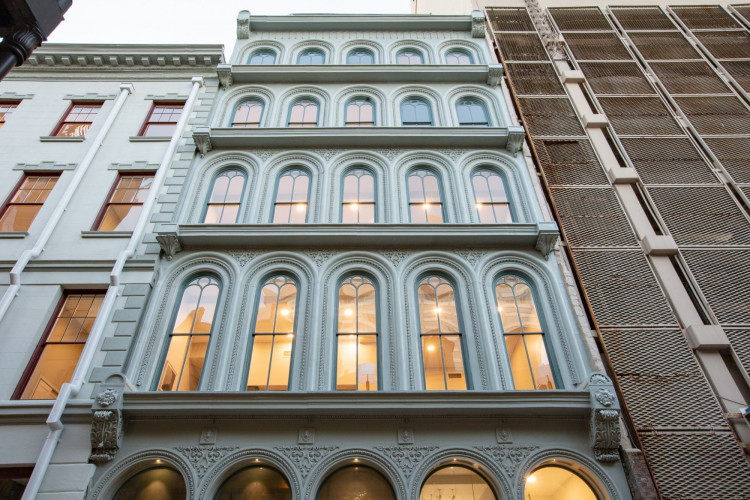 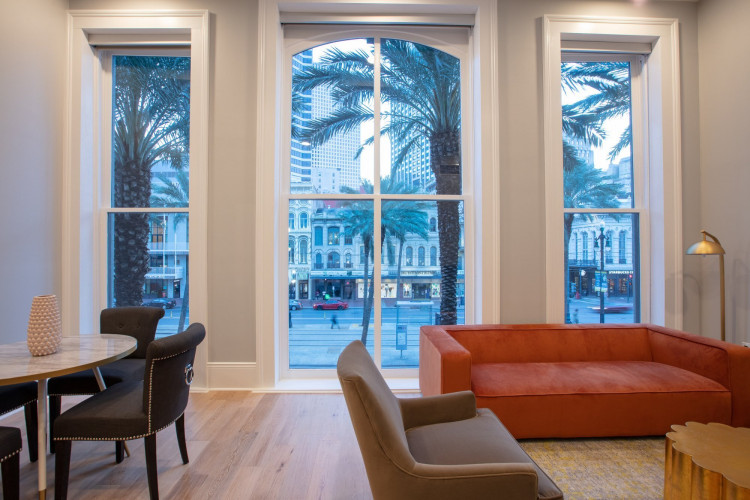 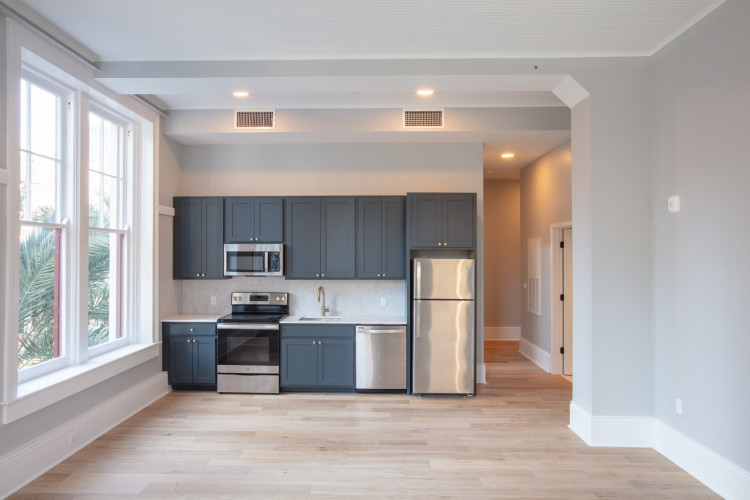 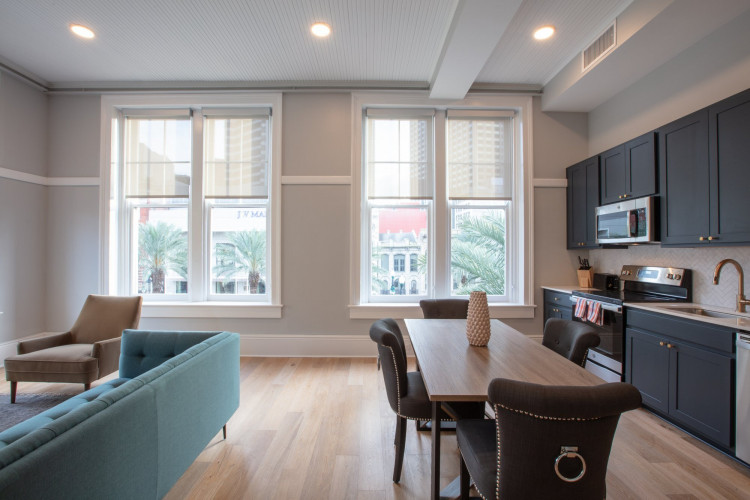 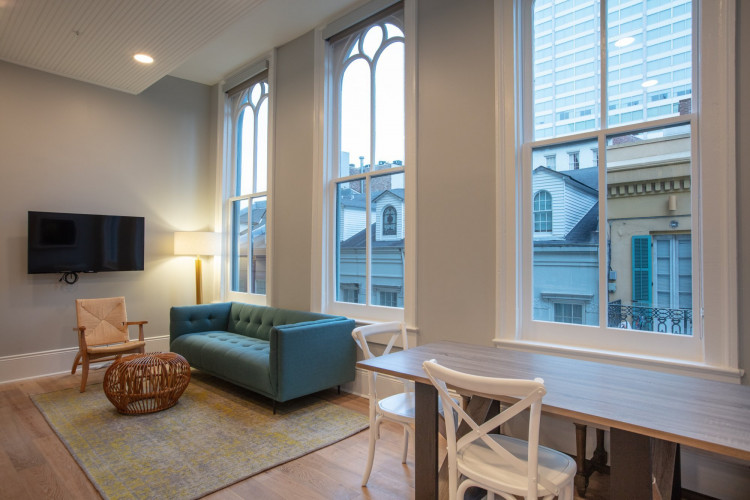 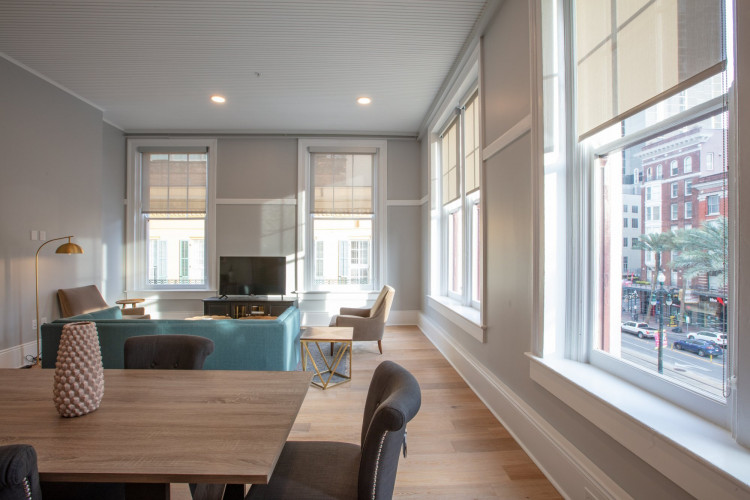 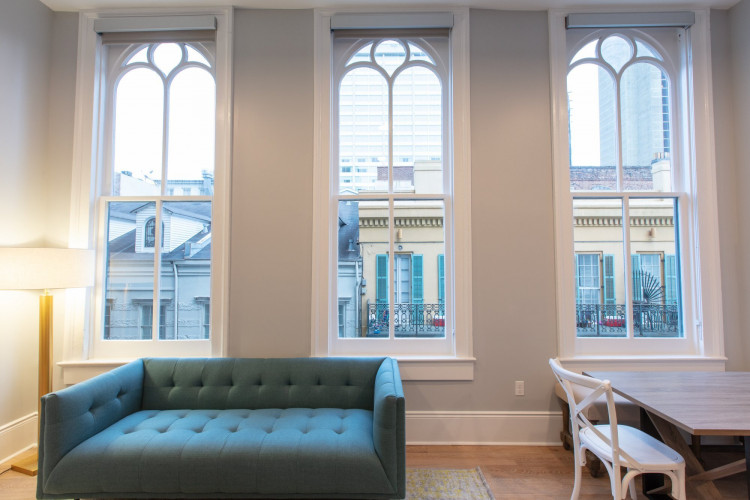 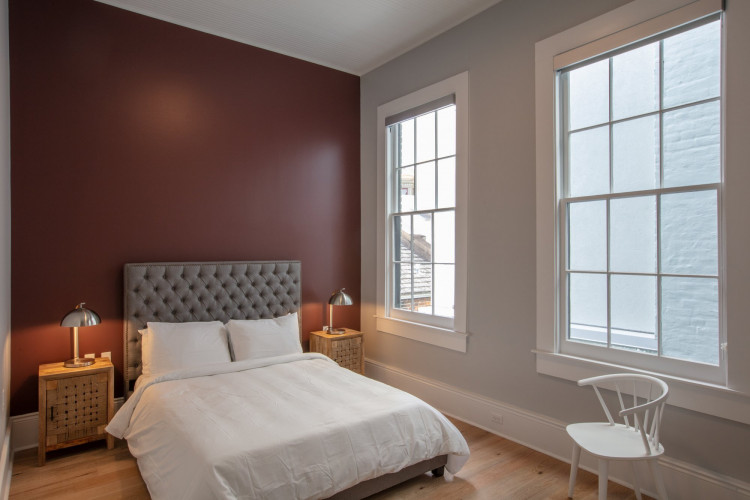 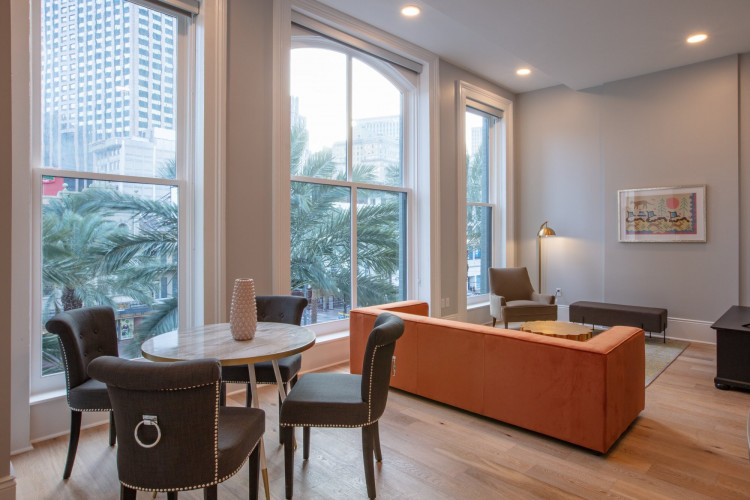 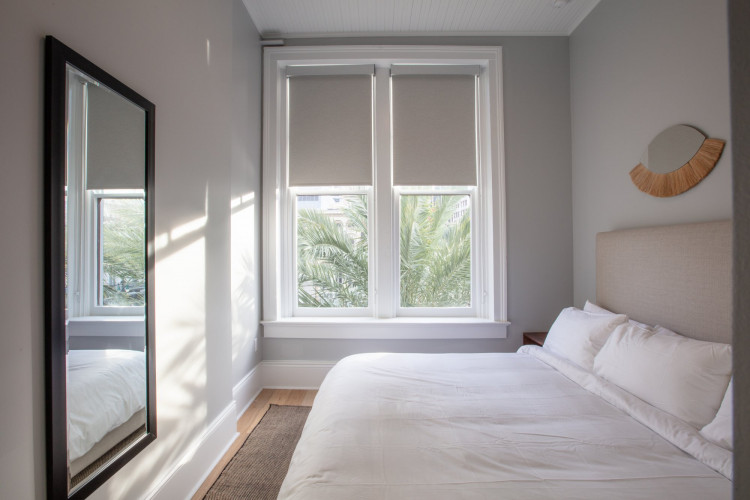 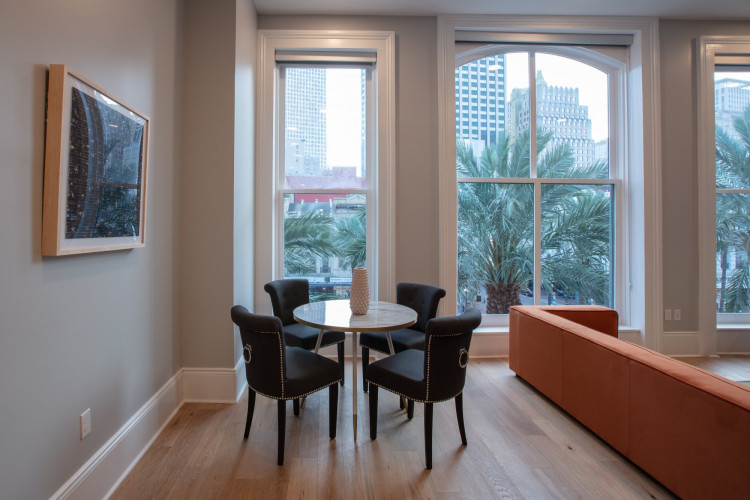 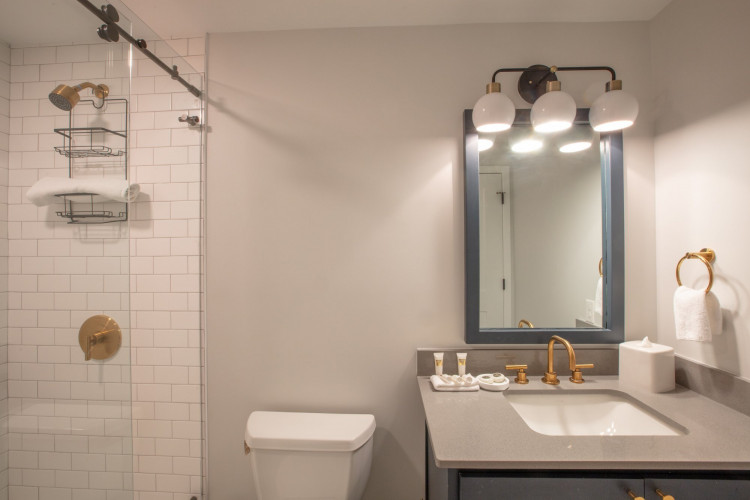 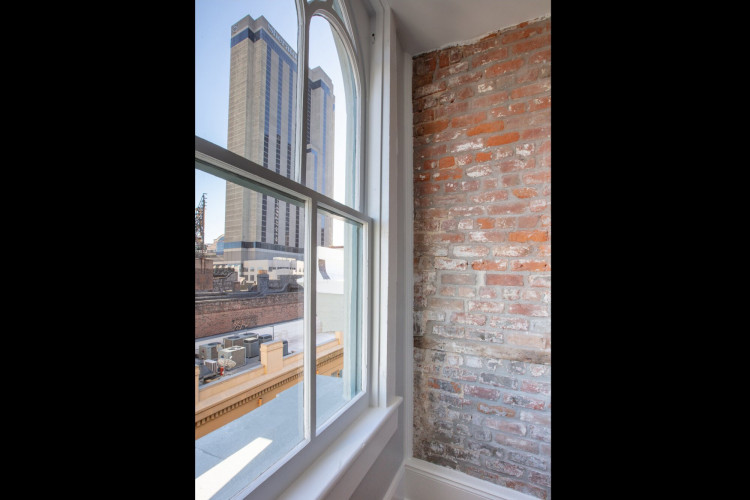 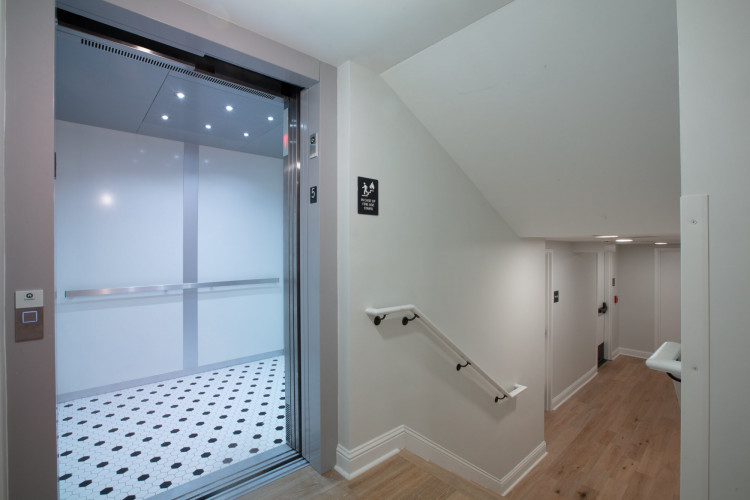 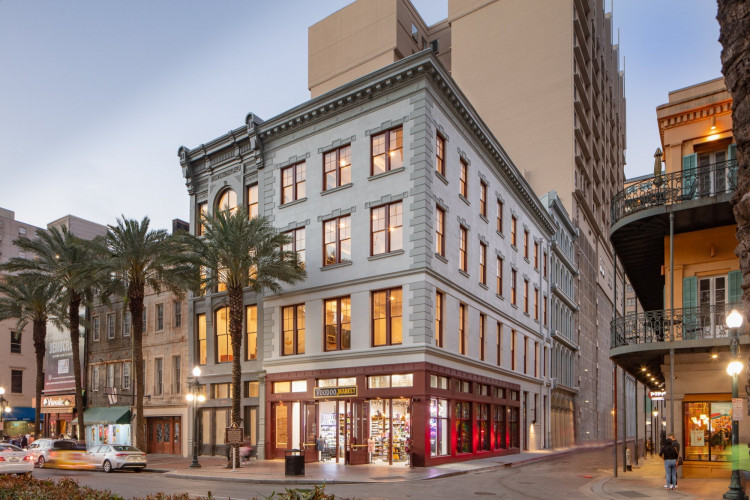 The building at the corner of Canal Street and Exchange Place is a Neo-Classical style four-story stucco-over-brick structure with beautifully restored windows that bring in plenty of natural light and provide expansive views of Canal Street. It was here, in 1896, that William T. “Pop” Rock and Walter J. Wainwright opened the United States’ first permanent, for-profit movie theater. This theater was referred to as Vitascope Hall and is the inspiration for the development’s new moniker. Just behind it, is its neighbor 111 Exchange Place. The two properties have functioned as one building since at least the 1920s. Not to be outdone by the unique history next door, this building is listed as a City Landmark by the Historic District Landmark Commission due to its architectural significance and noted architect, James Gallier of Gallier and Esterbrook Architects. This building has the only completely intact cast iron façade remaining in New Orleans and is in the Venetian Renaissance style. Extensive existing conditions work and careful coordination with the contractor resulted in a magnificently repaired and restored façade tucked away on Exchange Place. Finally, the third building in the development is located at 629 Canal Street, just lakeside of 623 Canal Street. It is a petite, four story brick building featuring massive arched and squared windows, ornamental spandrel panels, corbeled pilasters, and a unique pressed metal ornamental cornice in the Italianate style. Access to the upper floors of this building is now solely through the two aforementioned properties.

Within these historic buildings now resides two commercial spaces of approximately 4000 square feet total and 20 two and three-bedroom hotel suites across the historic upper floors and small penthouse addition. The modern storefronts of each building were replaced by completely redesigned wood storefront systems to allow for increased visual connection with the street, while respectfully tying into the original architecture. Upstairs, all units are bright and airy thanks to the large restored historic windows, high ceilings, some of which feature bead board just like the original architects’ designed, and hardwood floors. Each unit has its own laundry facilities and contemporary kitchens and bathrooms with striking navy blue cabinetry, quartz countertops, marble-look tile, and champagne bronze accents. The interior and exterior designs seamlessly blend the beauty and grandeur of the historic buildings with modern styling, sensibility, and functionality.